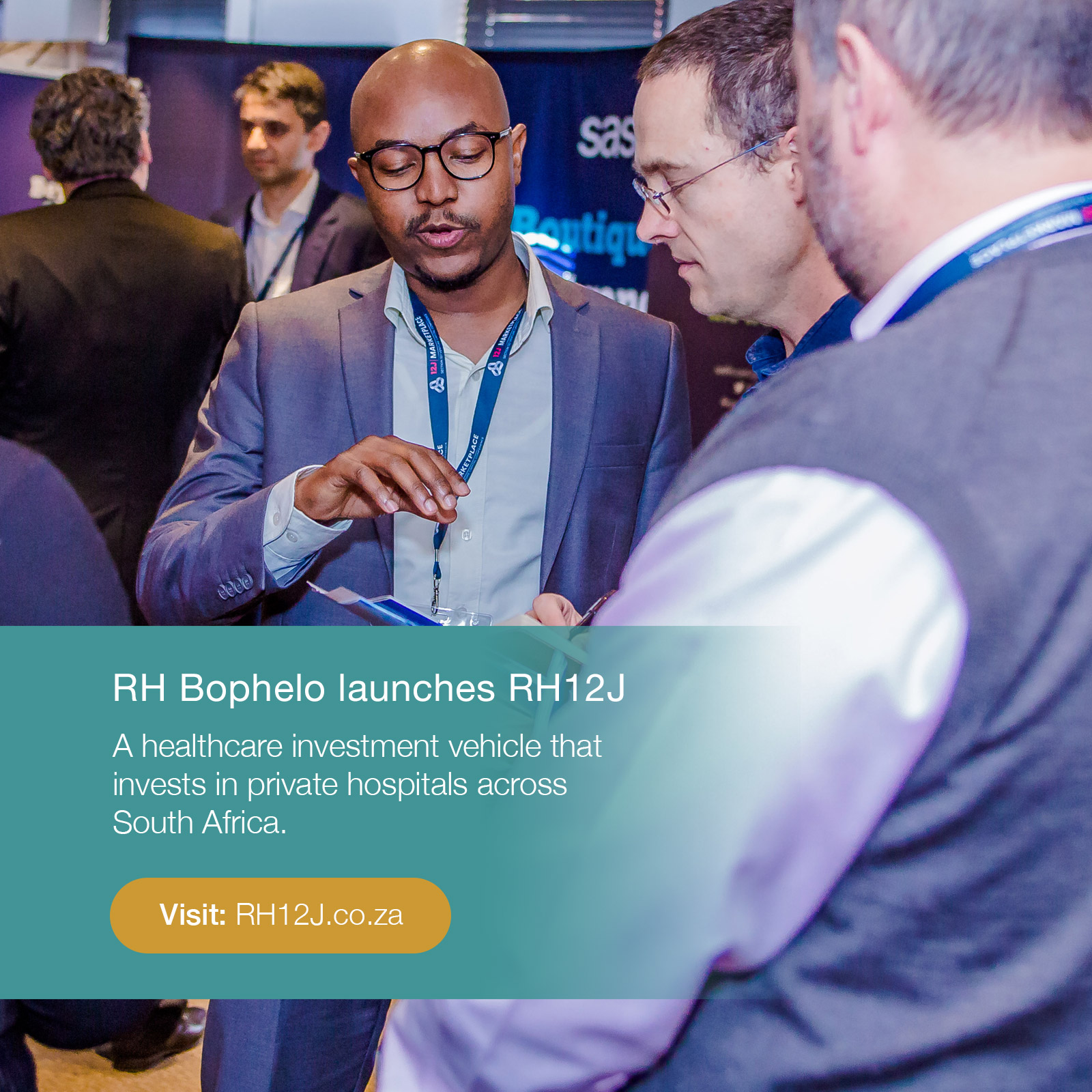 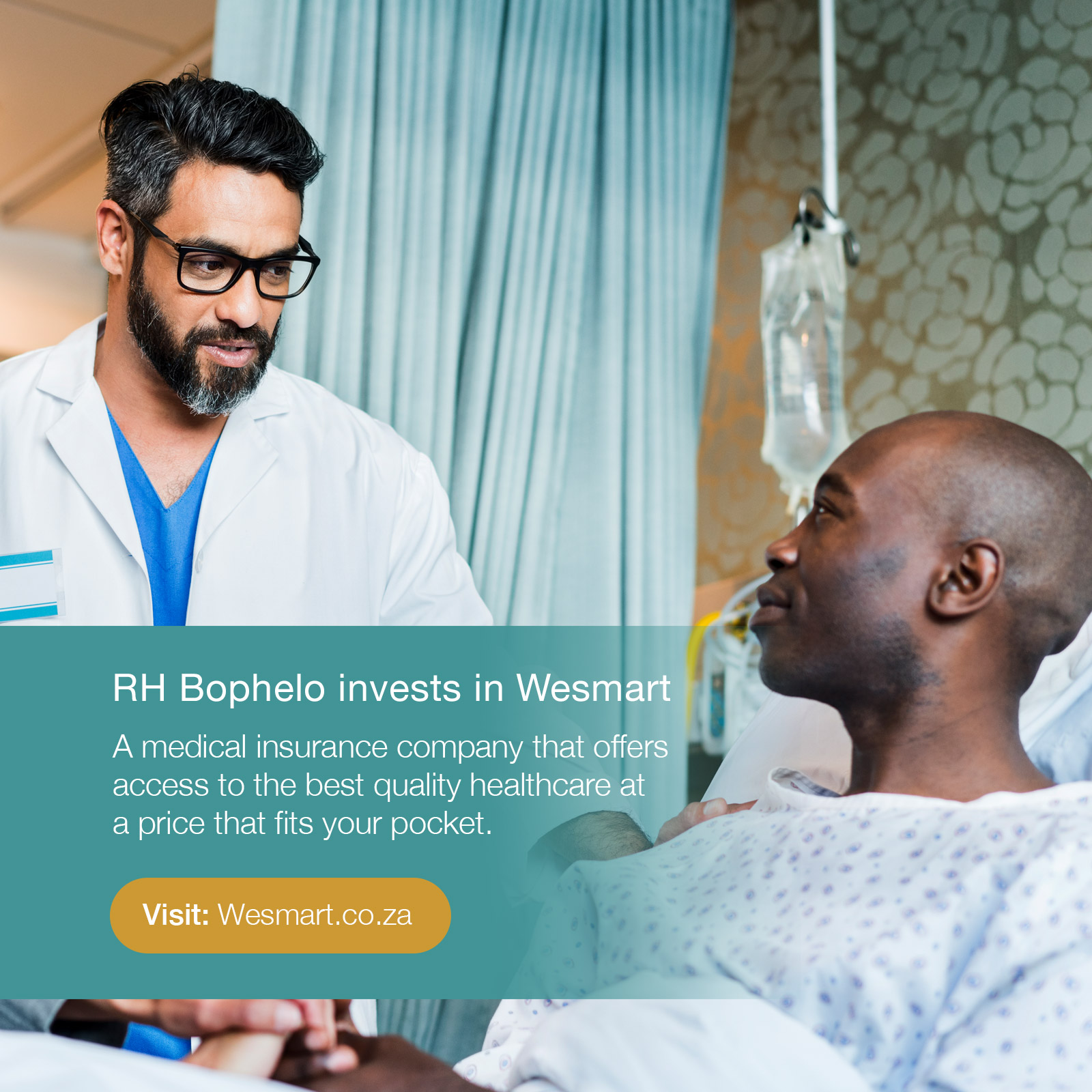 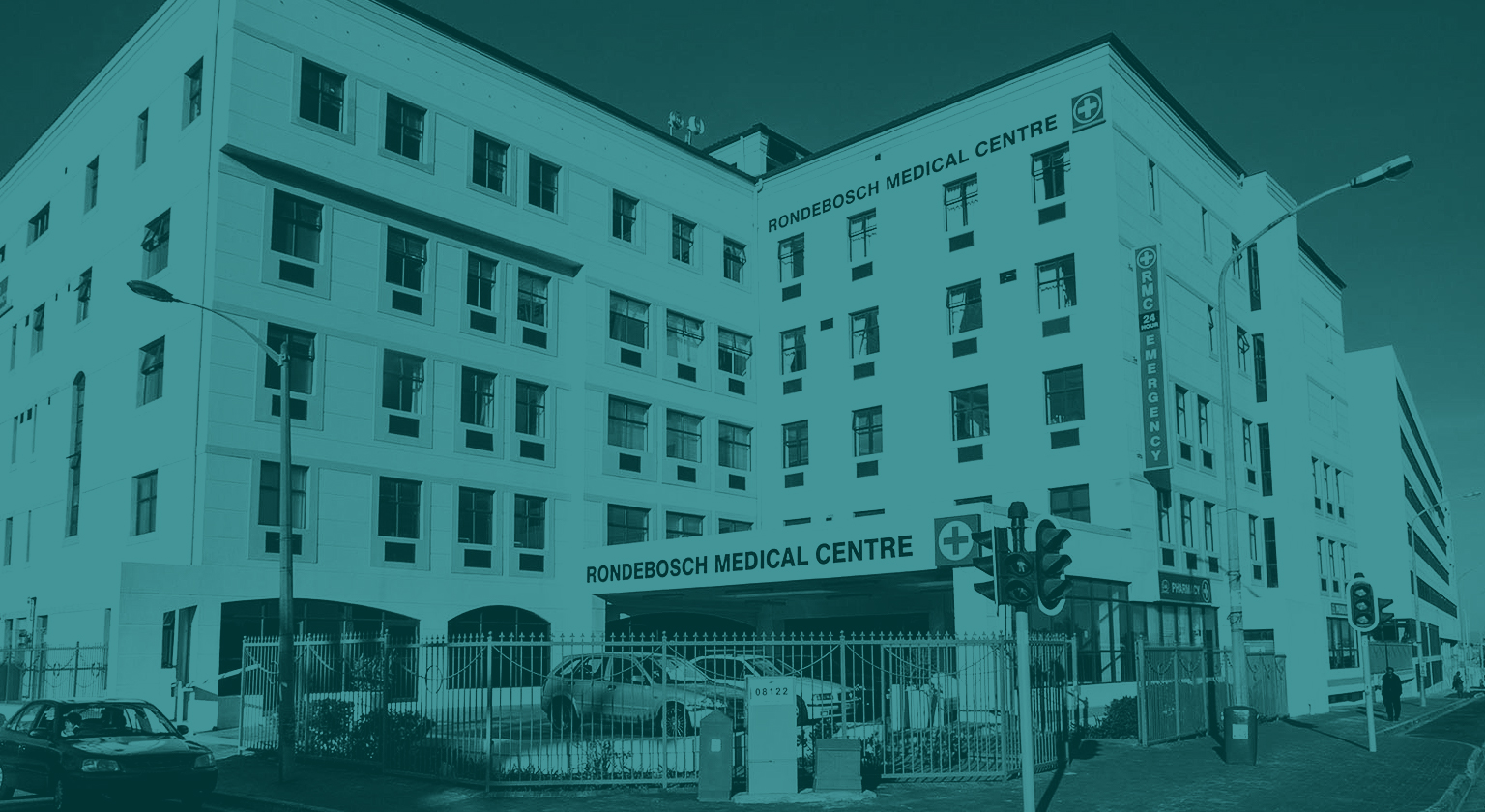 RH Bophelo is pleased to announce that on 14 May 2018 it entered into transaction agreements (“Agreements”), in terms of which, upon the fulfilment or waiver (as the case may be) of the conditions precedent in these Agreements, RH Bophelo, will, inter alia–

RMC is an acute 123-bed (with the capacity and potential to reach above 200 beds) independent private hospital conveniently located on Klipfontein Road, opposite the Red Cross Children’sHospital, in Rondebosch, Cape Town. RMC was officially established in 2011 after converting an existing 27 bed and 4 theatre day hospital license into an acute license and moving the longstanding practice, which was originally established and has been operating since the late 1980s, to Rondebosch. RMC has grown incrementally with limited capital and the founders have successfully applied to the Department of Health for an increase in beds over the years.

90% of the entire issued share capital of RMC is currently owned by Perthpark PropertiesProprietary Limited (“Perthpark”). The remaining 10% of issued shares in RMC is held by the founding partners of RMC and persons related to them.

Perthpark wholly owns the company which owns the property and premises at which RMC is situated (“Propco”) and RMC leases the premises at which it is situated from Propco. The lease agreement will be amended (as contemplated under Conditions Precedent below) and the parties have agreed that RMC will be granted a long-term lease arrangement, which will be registered as such, to afford RMC security of tenure in its current location.

RMC has an operating agreement with Rondebosch Heart Company Proprietary Limited (“RHC”)in terms of which RMC grants RHC the exclusive right to operate a cardiac medical facility separately. RHC pays a portion of the service and associated costs of RMC which portion is attributable to that used for the cardiac facilities.

A pharmacy business, which is wholly owned by Perthpark, operates at the premises at which RMC is situated (“RMC Pharmacy“) and currently provides pharmaceutical and stock supply services to RMC through a pharmacy agreement. It is the intention for either RMC or RH Bophelo Opco to acquire at least 50% of the share capital of RMC Pharmacy, which is currently wholly owned by Perthpark. RH Bophelo Opco and the existing shareholders have undertaken to agree and finalise the terms of such transaction by no later than the 3rd month following the expiry of the 3 year period following the subscription by RH Bophelo Opco, and on the basis that they shall fully and finally implement such transaction by no later than the 4th Anniversary. See further details below under Salient Terms of the Acquisition.

3. Rationale for the Acquisition

The Acquisition represents a strategic opportunity for RH Bophelo to invest in a 123-bed acute urban hospital, servicing a strategic region in Cape Town’s metropolis. Whilst RH Bophelo Opco’s initial ownership position will be that of a minority stake, RH Bophelo Opco has entered into the Option and as a result, will be entitled to acquire an additional 21% and hence own a controlling stake in RMC. Furthermore, the Acquisition provides RH Bophelo with, inter alia, the following: 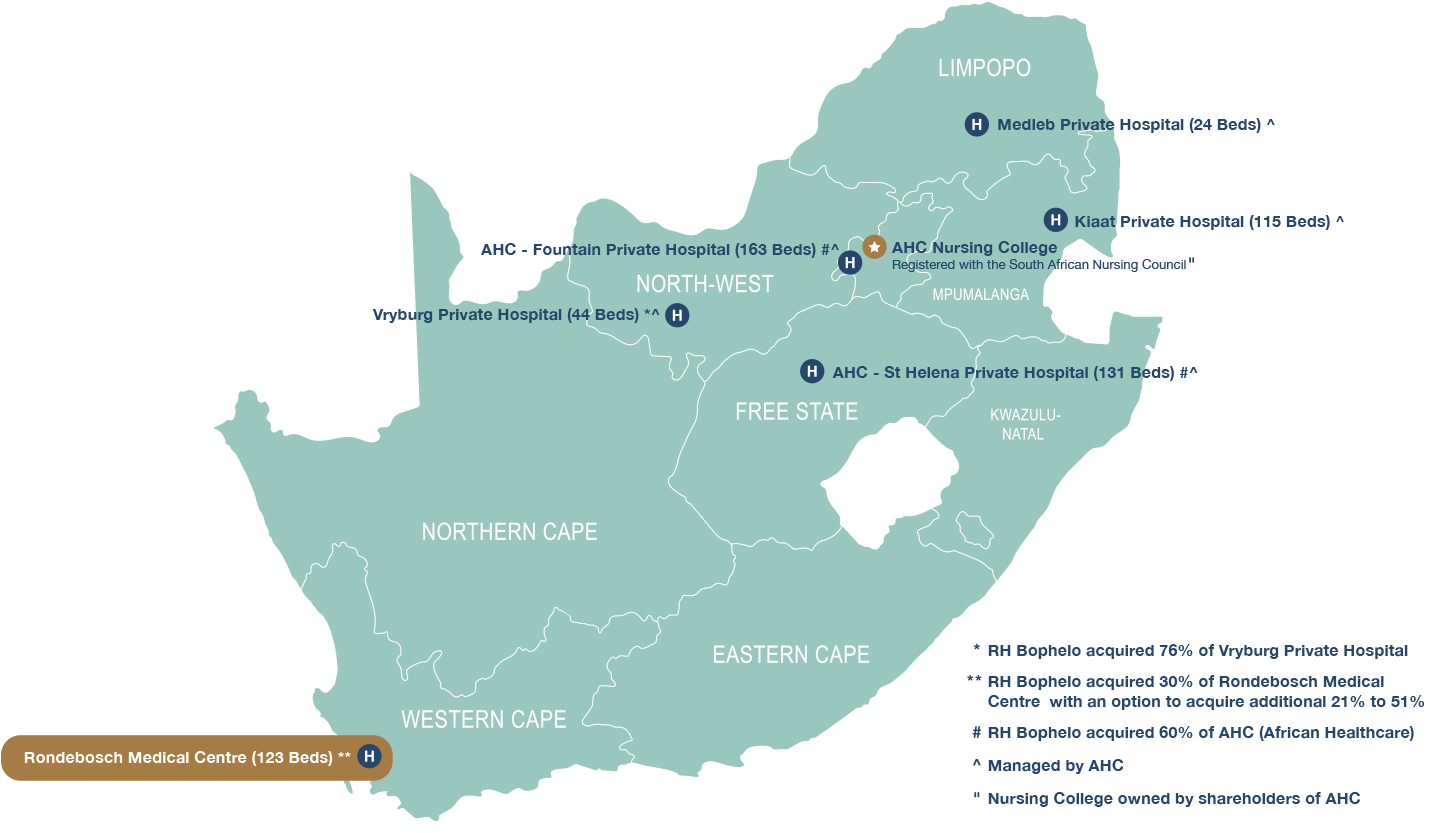 RH Bophelo (through RH Bophelo Opco) will, inter alia, acquire 30% of the entire issued share capital in RMC for a total consideration of R50.0 million as follows:

Advance of the RHB Loan

RH Bophelo Opco will have the Option to buy an additional 21% equity stake in RMC from Perthpark on, inter alia, the following salient terms:

Exercise of the Option will result in RH Bophelo Opco acquiring a controlling stake in RMC.

It is the intention for either RMC or RH Bophelo Opco to acquire at least 50% of the share capital of RMC Pharmacy, which is currently wholly owned by Perthpark. RH Bophelo Opco and the existing shareholders have undertaken to agree and finalise the terms of such transaction by no later than the 3rd month following the 3rd Anniversary (failing which, an independent expert shall determine same) and on the basis that they shall fully and finally implement such transaction by no later than the 4th Anniversary.

Warranties and indemnities typical of a transaction of this nature have been provided for. An amount shall be retained by RMC in a ring-fenced account for a period of 2 years as security for any warranty or indemnity claims instituted by RH Bophelo Opco.

RMC is currently in an expansion/growth phase, whereby R50 million will be used to support this growth as follows:

The remaining conditions precedent in terms of the Acquisition to be fulfilled or waived (as the case may be) by no later than 30 June 2018 (or such later date as the parties may agree to in writing) are as follows:

The latest unaudited management accounts, as at 28 February 2018, which have been prepared in terms of IFRS and which RH Bopheo is satisfied with the quality, showed that RMC had a net asset value of R28.5 million and a net profit after tax of R1.4 million for the year ended 28 February 2018. The directors of RH Bophelo have performed a valuation of the projected future cash flows of RMC and believes that the equity value of RMC (100%) will be between R34.6 million and R51.7 million with the value of the Option being R120,000. This forecast has not been reviewed or reported on by the company’s auditors.

The Acquisition qualifies as a Category 2 transaction in terms of the JSE Listings Requirements and does not require shareholder approval.

As noted in RH Bophelo’s investment policy, in order to provide shareholders with additional protection, shareholders are afforded the opportunity to vote on specific transactions up to a threshold of R300 million, however, subject to the categorisation requirements of Section 9 of the JSE Listings Requirements. As a result, following the Acquisition and previous acquisitions made since listing, RH Bophelo requires approval from shareholders (subject to section 9 of the JSE Listings Requirements) for further transactions of R163.2 million.

The full announcement is also available for inspection at the offices of RH Bophelo (3rd Floor, 18 Melrose Boulevard, Melrose Arch, Johannesburg, 2076) and the offices of the sponsor, Deloitte & Touche Sponsor Services (Pty)Ltd (The Woodlands, Woodlands Drive, Woodmead, Sandton, Johannesburg, 2196), at no charge during normal office hours on business days from 15 May 2018. 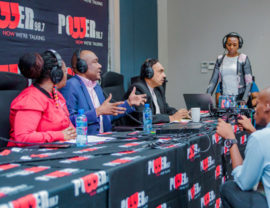 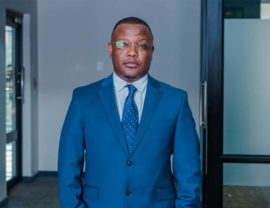 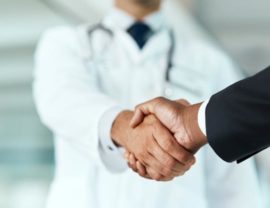 Our investment approach is to consolidate various small operating assets, in order to create a larger operating entity.